Prof. Simon Petrikoff is driven insane by an ancient magic crown the magic, which is the only thing that keeps him and his adopted demon daughter marceline alive after the human world is destroyed. 1000 years later a new world is formed a kingdom of candy run by a harsh ruler Bonnibel bubblegum and monsters and demons roam the lands. Finn and Jake two adventurers become great friends with Marceline, Bubblegum and Simon and they uncover secrets about their past as Finn (the last human) searches for that of his own. As the evil Lich resurfaces, Simon’s time displaced fiance Betty goes insane and Finn’s sentient grass arm becomes a conflicted volitle plant clone. Finn, Jake, Simon, Marceline and Bubblegum must do whatever they can to save the world from another apocalypse when Bonnibel’s evil uncle declares war. 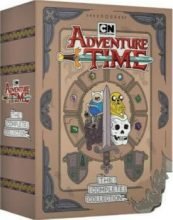