Dragon Ball Super is a Japanese manga series written by Akira Toriyama and illustrated by Toyotarou. A sequel to Toriyama’s original Dragon Ball manga, it follows the adventures of Goku and friends during the ten-year timeskip after the defeat of Majin Buu.[3] It began serialization in Shueisha’s sh¨­nen manga magazine V Jump in June 2015. The manga is published in English by Viz Media and simulpublished by Shueisha on their Manga Plus platform. 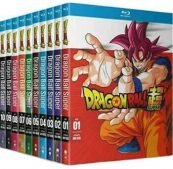