Animated version of the popular Muppet series “Fraggle Rock”; Survived only one season on NBC’s Saturday Morning line-up due to tough competition (Pee-Wee’s Playhouse at the height of it’s popularity) and because it just wasn’t as good as it’s live-action inspiration. As in the original, the Fraggles are a group of odd creatures that live underground with the workaholic Doozers, while trying to avoid the giant Gorge’s and the people in the human world. 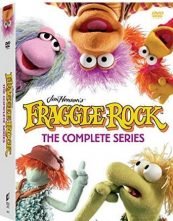