It¡¯s the Sonic you know and love until an incredible twist thrusts Sonic into a new adventure featuring a reinvented cast and Sonic like you¡¯ve never seen him before, where the fate of the multiverse rests in his gloved hands. Sonic¡¯s adventure is about more than a race to save the universe from the evil machinations of his longtime nemesis Dr. Eggman and his army of badnik robots, it¡¯s a race to save his friends, friends that he took for granted. 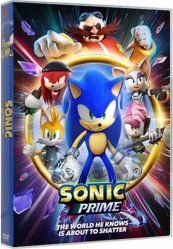